Book three of The Donora Story Collection pulls me back in time as Patryk continues his story, this time about Stan “The Magician” Musial. 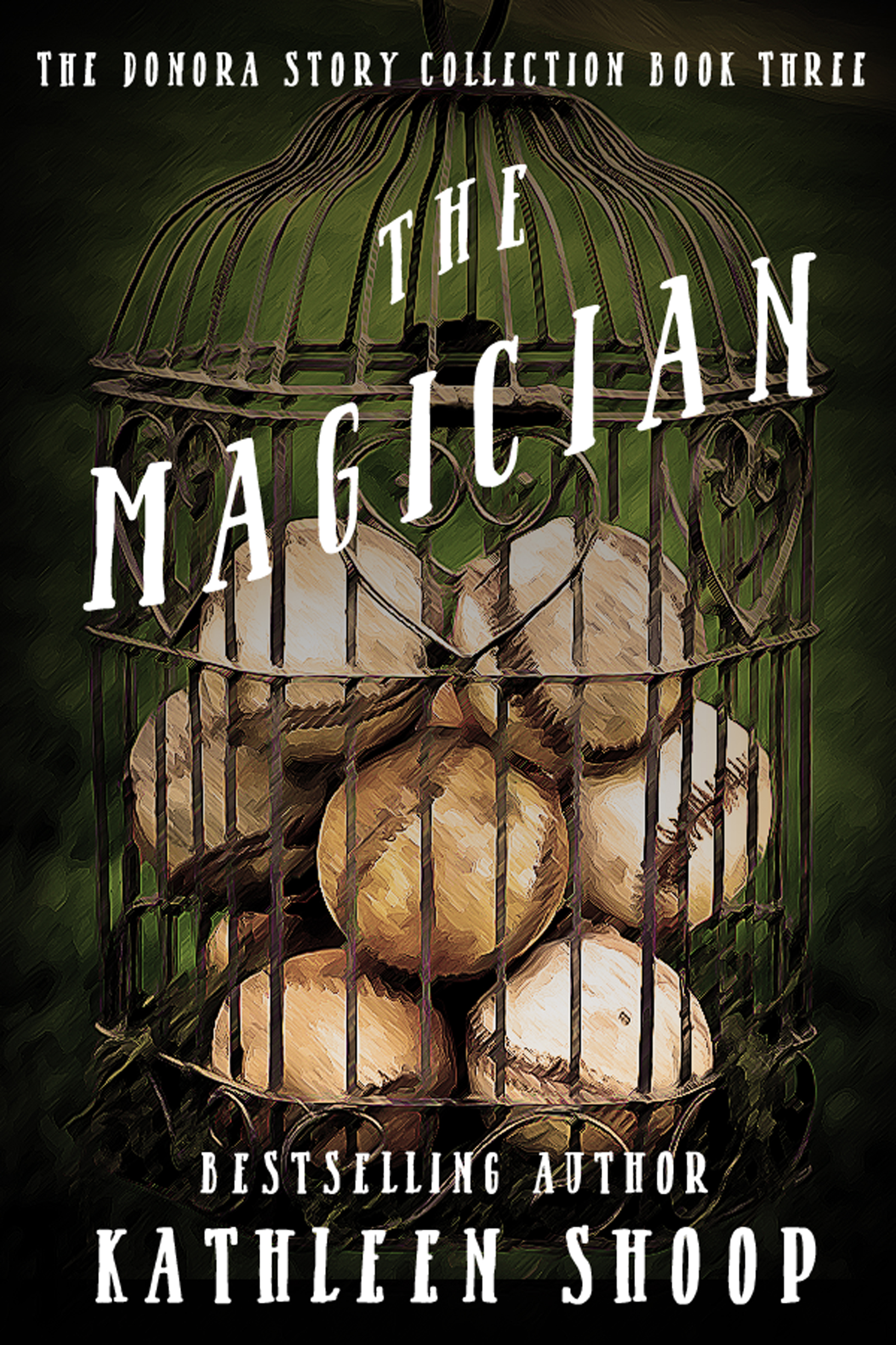 Ninety-two year old Patryk Rusek is on the run, bath-towel flying off, with nothing but his new Nikes to carry him to freedom. His plan to escape from Blue Horizon Retirement Community is in motion. Except his great-grandson Owen isn’t at the pickup point. Resigned to his fate, Patryk returns to his room and reads from his incredible hand-drawn chronicle of Donora, luring half the nursing home’s employees and residents into the room, mesmerizing them with childhood tales of Stan F. Musial, beloved baseball hall of famer.

Mary Musial is expecting again. After four daughters, her husband Lukasz is losing hope for a son. But Jupiter is rising when Stanisław Franciszek Musiał is born on November 21, 1920, and the midwife predicts he will live an extraordinary life. Young Stanley’s physical talents show themselves at the Polish Falcons and on the baseball field. But rather than pride, Lukasz’s spirits plummet after mill injuries turn his American dream into a living nightmare.

When the Depression hits and the mills close, tension grips every Donora household. Meanwhile as Stan matures, he draws attention from the press, college coaches, and professional baseball scouts. Suddenly his singular dream is set against options he’d never imagined. Every choice threatens to disappoint coaches, teachers, his girlfriend, and most of all his parents. Even with the talent to achieve his goals, doubt creeps in. Can he find the courage to leave everything he knows and all the people he loves to fulfill his destiny? Or will he wait too long and risk it all?

Available to buy from the following sites…
Amazon.com   Amazon.co.uk   Paperback

“Shoop elevates the story of working-class Donorans in her carefully sculpted prose woven deftly with both historical research and fictional craft that rival any of her contemporaries. Through her words, readers are privy to the hard scrabble life lived by Stan Musial’s parents, Mary and Lukasz, whose love story we followed in The Strongman and the Mermaid. The Magician is a must-read for anyone who loves baseball, small town life, and the pursuit of the American Dream.”
–Christina Fisanick, PhD, Associate Professor of English, California University of Pennsylvania

I have to be honest and tell you that when I volunteered to read this book, I didn’t recall reading the previous two books! I was assured that I had read them and as soon as I started reading it; it all came flooding back!

This entire collection is not my ‘norm’ when it comes to books and reading genres, but there is something about it that pulls me back to it; it sucks me in and I want to sit and listen to the stories that Patryk tells his great-grandson, Owen.

There is nothing I enjoyed more than sitting with my grandpa growing up and listening to his stories. This book puts me right back there with Patryk sharing stories with Owen. This story takes us back to Mary and Lukasz, their girls, and their first born son, Stanshu.

You don’t have to have read the first two books to follow along with this one, but if you want the history behind Donora, behind Mary and behind Lukasz, reading the previous books will definitely fill in the gaps of history that share the past of Stan’s parents growing up. Of an immigrant looking for the American dream. Of Mary and Lukasz falling in love and the obstacles that they face trying to find that American dream.

The Magician continues the history of the Musial family and watches not only as Stan grows up in search of his own “American” dream, but the continued frustration of Lukasz who constantly feels like he falls short on his own American dream and promises to his beloved.

The Donora Story Collection Book 1 – After the Fog 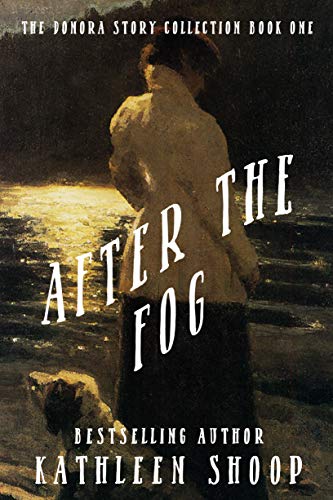 It’s 1948 in the steel town of Donora, Pennsylvania, site of the infamous “killing smog.” Public health nurse, Rose Pavlesic, has risen above her orphaned upbringing and created a life that reflects everything she missed as a child. She’s even managed to keep her painful secrets hidden from her doting husband, loving children, and large extended family.

When a stagnant weather pattern traps poisonous mill gasses in the valley, neighbors grow sicker and Rose’s nursing obligations thrust her into conflict she never could have fathomed. Consequences from her past collide with her present life, making her once clear decisions as gray as the suffocating smog. As pressure mounts, Rose finds she’s not the only one harboring lies. When the deadly fog finally clears, the loss of trust and faith leaves the Pavlesic family—and the whole town—splintered and shocked. With her new perspective, can Rose finally forgive herself and let her family’s healing begin?

The Donora Story Collection Book 2 – The Strongman and the Mermaid 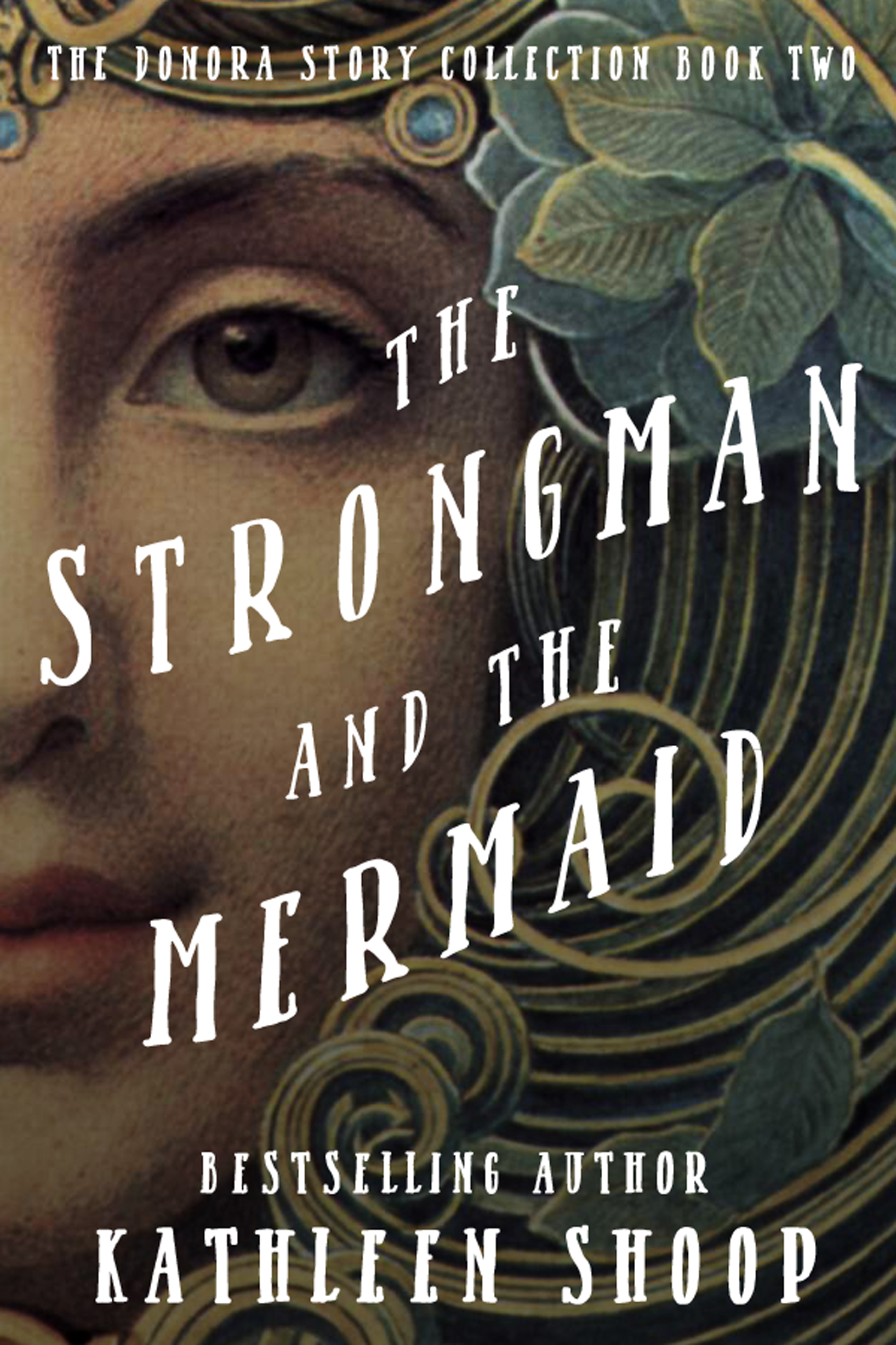 Ninety-one-year-old Patryk Rusek hides in his attic, hoping the searchers think he’s escaped. When Lucy finally bursts in, she discovers her beloved grandfather clutching a fat, hand-illustrated, antique book. In it is the story of Donora, the town that shaped America, its people and Patryk himself. Before long, Lucy and her son Owen lose track of their goal to get Grandpa Patryk somewhere “safe” as they’re drawn into the book, back in time, into stories that read like real-life fairytales born of purpose, hard-work, and chance.

In the early dawn of Donora, Pennsylvania, the mills make and shape the steel that builds America. Mary Lancos lives in a home on the hill overlooking town and its mighty Monongahela River. That tiny house bursts with her siblings and boarders. Wind whipping through the walls and windows makes Mary determined to marry well and create a better life.

Shy Pole, Lukasz Musial, arrives in Donora seeking the clear blue skies, green lawns, and better life he’d seen pictured on a postcard. Settled in Donora’s Polish community, Lukasz secures a coveted job in the wire mill. Life is set on course to achieve the American Dream. All he needs is a wife who believes in him, in his mighty, quiet, strength.

After a series of casual, friendly meetings, fate brings Mary and Lukasz to the river under a snowy, pink moonlit sky and everything changes. Their attraction is sudden and consuming, turning the pair onto an unexpected path. With mounting disapproval from Mary’s parents she and Lukasz must decide if love is enough to risk losing everything else that matters.

Bestselling author, Kathleen Shoop, holds a PhD in reading education and has more than 20 years of experience in the classroom. She writes historical fiction, women’s fiction and romance. Shoop’s novels have garnered various awards in the Independent Publisher Book Awards (IPPY), Eric Hoffer Book Awards, Indie Excellence Awards, Next Generation Indie Book Awards, Readers’ Favorite and the San Francisco Book Festival. Kathleen has been featured in USA Today and the Writer’s Guide to 2013. Her work has appeared in The Tribune-Review, four Chicken Soup for the Soul books and Pittsburgh Parent magazine. Kathleen coordinates Mindful Writing Retreats and is a regular presenter at conferences for writers.

I adore writing historical fiction (The Letter series, After the Fog and Donora Stories) but am having a blast writing romance like Home Again, Return to Love and Tending Her Heart (Endless Love series). Thank you so much for the time you take to read. 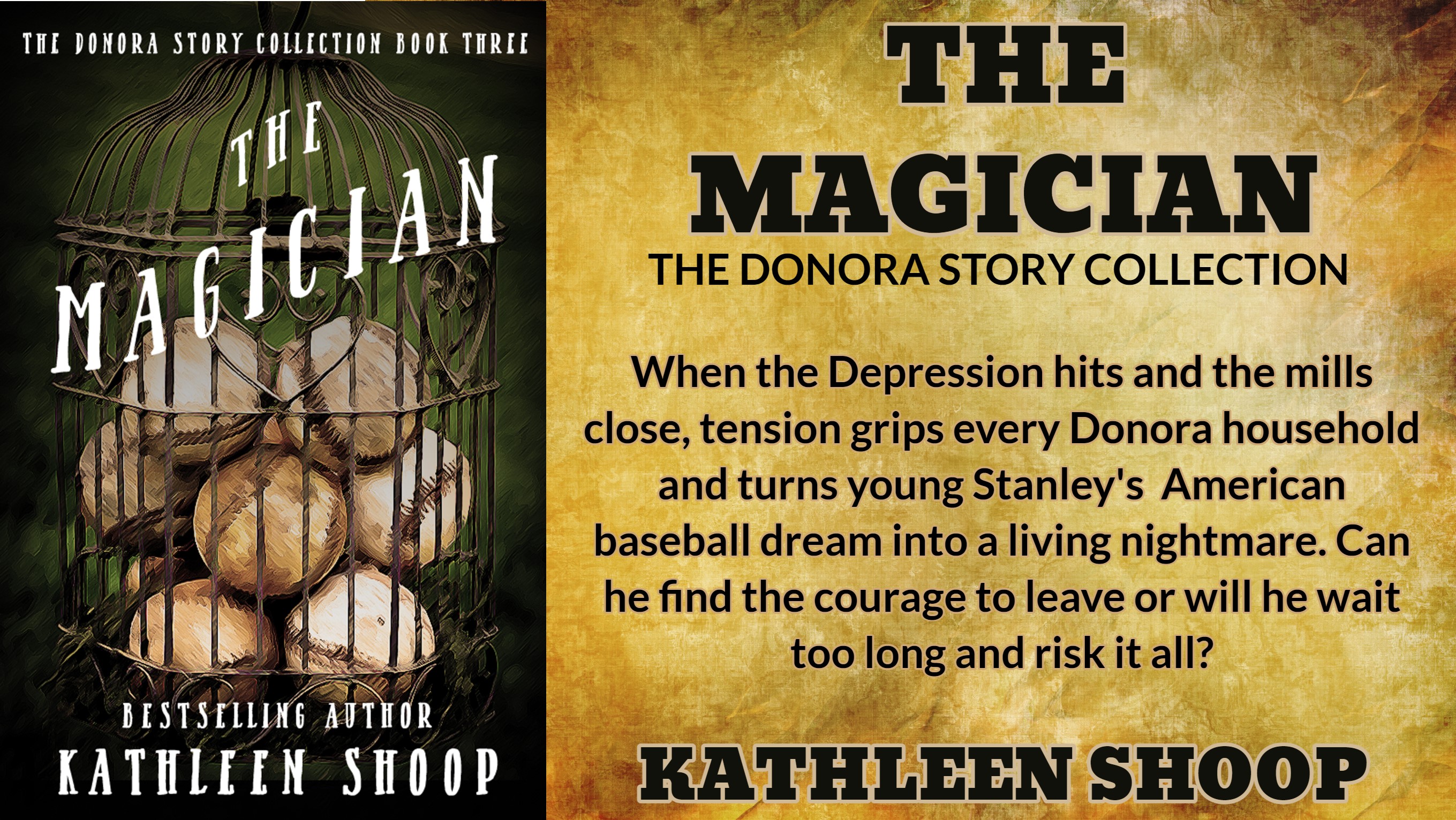 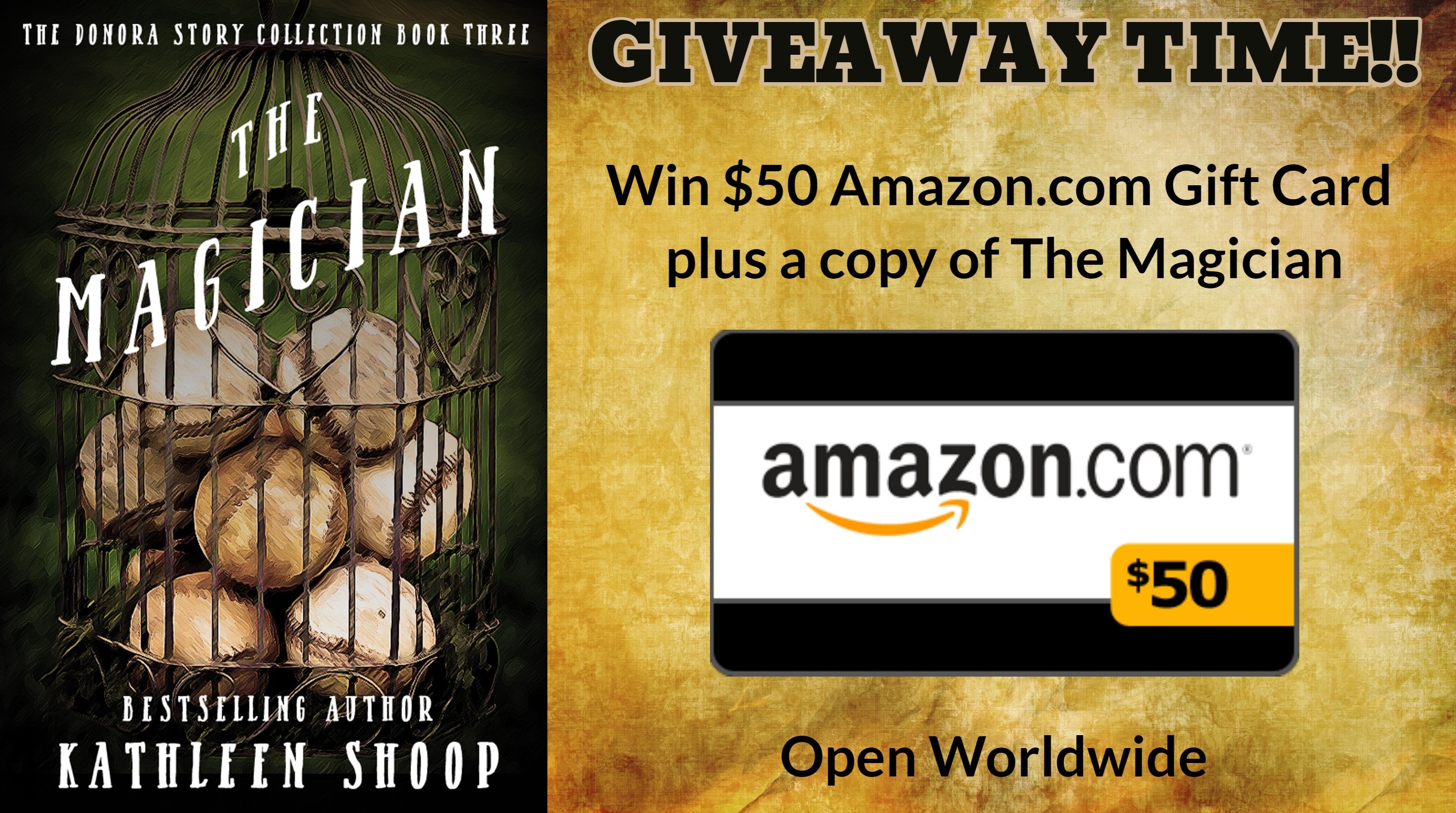 Win $50 Amazon.com Gift Card plus a copy of The Magician
Ending on Sunday 23rd May at 11.59pm EST