I have read several of L. Ron Hubbard’s books previously, but The Iron Duke was definitely… different. Read on to see why! 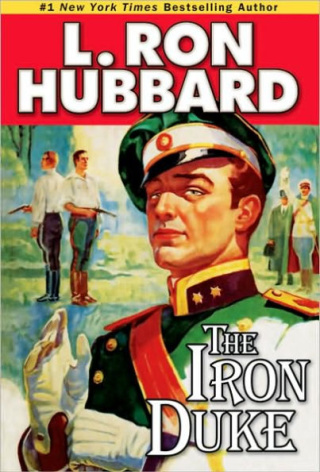 Meet Blacky Lee, ruggedly handsome with a quick wit and a roguish charm. Think Clark Gable with larceny in his heart and a price on his head. A price put there by the German Gestapo. But Blacky’s always got an angle, and this time it s as audacious as they come. He’ll hide in plain sight, impersonating the crowned head of a Balkan kingdom. He’ll become The Iron Duke.

Can he pull it off? Win the love of a country…and of a beautiful woman? All Blacky has to do is risk everything and, for once in his life, find a way to do the right thing. Get in on the deception as the audio version of The Iron Duke puts you in the middle of the royal con game. “Filled with realistic sound effects…and a classic film noir atmosphere, this inspired and well-polished entertainment will immerse listeners.” —Publishers Weekly

Hubbard and Gable were fast friends and fellow adventurers. While Hubbard was writing for Columbia Pictures in 1937, the studio often called upon him to doctor scripts for Gable—giving him a unique knowledge of the man and inspiration for characters like Blacky Lee.

I have read several of L. Ron Hubbard’s pulp fiction books and this one… this one was… weird.

I am not entirely sure what the entire goal was for Blacky Lee, but talk about one arrogant man! And the tricks he played! Daring! (And almost cunning!)

I found that Blacky Lee’s arrogance and daring ways caused for some confusion, but once it all started to fall into place; one could really see what a conniving man he was.

All in all, I enjoy taking a break from my usual to take enjoy a pulp fiction read. They are short enough and provide excitement in those few pages!

All of the books I have read by L. Ron Hubbard have all been enjoyable and recommend him to anyone!

With 19 New York Times bestsellers and more than 320 million copies of his works in circulation, L. Ron Hubbard is among the most enduring and widely read authors of our time. As a leading light of American Pulp Fiction through the 1930s and ’40s, he is further among the most influential authors of the modern age. Indeed, from Ray Bradbury to Stephen King, there is scarcely a master of imaginative tales who has not paid tribute to L. Ron Hubbard.

Then too, of course, there is all L. Ron Hubbard represents as the Founder of Dianetics and Scientology and thus the only major religion born in the 20th century.

While, as such, he presents the culmination of science and spiritual technology as embodied in the religion of Scientology.