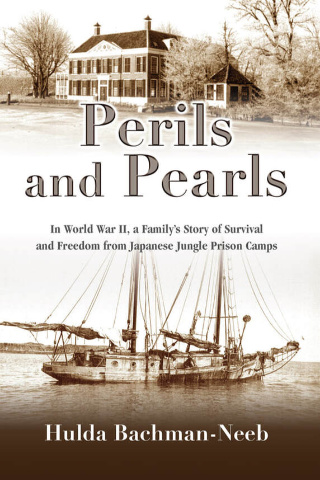 “The story of our Dutch family being ripped apart isn’t unique. Millions suffered beyond description during the war. However, today, I have the opportunity to share our story with others so that they may know just how priceless their freedom is. That is my sincerest wish in bringing this book to the general public.” – Hulda Bachmann-Neeb

In World War II much of Asia fell under Japanese control after the attack on Pearl Harbor on December 7, 1941. All non-Asians were imprisoned in concentration camps until August of 1945, the end of the war in the Pacific. This is the story of a Dutch family, resident in the Dutch East Indies, that fell victim to the Japanese occupation and was interned in jungle camps throughout the war. It tells the journey from riches to rags, from fear and suffering, to the joy of freedom and recovery.

I am not usually one to read memoirs or historical books, but something about this one intrigued me.

I have to admit, the first chapter to chapter and a half, I found to be long, drawn out, confusing and boring – it wasn’t so much the book, it is definitely me. I am not a history person; I have never liked history. The first chapter or so was history. It was a background of history, geography, and family lineage.

The middle of Chapter 2 really started focus on the author and her family which is where I started to find everything interesting.

Because history is not my subject of choice, I really had no idea that the Japanese had taken and imprisoned people, much like Hitler did with the Jewish; and during the same time frame. (Which brings up a whole new point of why did we learn so much about the Holocaust in school education, but never learned about the Japanese imprisoning the Caucasians on the West Pacific Rim!?)

I have never read much on the Holocaust, but it is a well known subject that I have learned about. I find it interesting that I never learned about the situation with the non-Japanese people.

The story follows the authors family from the different internment camps that they were sent to; how they were treated; events they went through; as well as how some of her author family were treated (or lack there of).

I cannot imagine going through such a thing and was quickly sucked into the book and what was happening with the family.

This was a good read as well as a great lesson of history. If history is your thing – you will enjoy this read. If history isn’t your expertise, but is of some interest – again, this book is a good read. There was another book referenced within this one on another woman’s experience and I look forward to reading that one as well to learn even more.

I recommend reading the book and learning about the history of this family and those that occupied the West Pacific Rim during this time period.

Hulda Bachman–Neeb was born in Indonesia of colonial Dutch parentage two years before the Pearl Harbor attack on December 7, 1941. Because much of Asia fell under Japanese control, all non-Asians were imprisoned in concentration camps until August of 1945, the end of the war in the Pacific. As a member of the Dutch Foreign Service in her adult life, Hulda held assignments in twenty-five countries over a period of thirty-six years, retiring in 1996. She is married to an American, James Bachman, a historian and author, and has dual citizenship. Hulda and her husband live in Estes Park, Colorado.