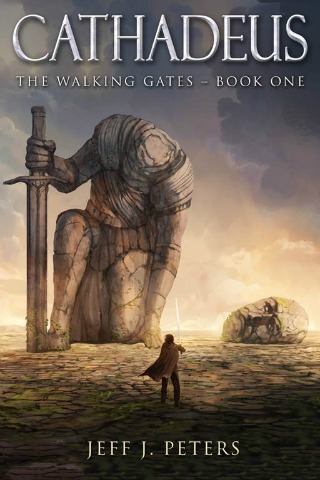 It has been six hundred years since the Alchemists fused together men and beasts to form strong, mindless slaves. Now, their most vicious creations have attacked the mystical Walking Gates, slaughtering their Keepers and isolating their cities. Wounded in the brutal attack, Braxton Prinn’s mother is on the verge of death and he makes a desperate journey to find the reclusive elven master who can save her. But when he discovers an ancient magic, Brax is caught up in an even greater struggle and soon finds himself hunted for his power. Drawn into the chaos of an impending war and pursued by enemies on all sides, Brax must fight to save his mother and her race from slipping into darkness. Though his untamed magic may be the greatest threat of all . . . ​

What Readers are Saying about Cathadeus:

“Jeff J. Peters’ strong cinematic writing style allowed me to easily visualize the story and feel that I was right there alongside the characters.”
– Alison W.

“Jeff J. Peters’ writing is so smooth and easy to read – I can’t tell you how much of a pleasure it was…and how quickly you end up being drawn into the story because of it.”
– Amanda R.

“Cathadeus is the best kind of fantasy story – you get to learn along with a flawed main character while you get lost in a richly designed world. You can’t help but keep reading. A cleanly written pairing of characters you wish you could spend more time with and an enthralling world built around them. Cathadeus is the kind of story that plays perfectly off of your imagination, with characters grounded in reality to make it feel like you could really be there.”
– Ryan N.

“Jeff J. Peters definitely has storytelling skills…The story stayed on my mind when I wasn’t reading it. Young readers will be drawn in this imaginative story, while they relate to Braxton’s struggles with temper, insecurity, and young love. Cathadeus is dramatic, with an anxious tone—at times bleak, as the story keeps you wondering until the final battle if good will prevail.”
– Elizabeth C.​

Two large, muscular beasts stood behind the flames and slightly to one side, another lying further back and to the left.

They occasionally entered the Spine to hunt, wearing totems for protection that never worked, and his kin always defeated them. There hadn’t been any significant intrusion in almost six hundred years—not since the Breath of the Dragon wiped out their valley.

“So what ya doing in the mountains?” Thrag mumbled to himself, studying their bull-like faces. They had furs and leather jerkins covering their human bodies, and their weaponry was too advanced for a hunting party. Sentries, he concluded. But for what?

He needed to find out and report in, and they were too dangerous to be left alone.

Unstrapping his giant battleax from across his back, he loosened the throwing weapon in his belt. Clenching his jaw, he readied to charge, then stopped. He couldn’t see into the trees. Normally, he wouldn’t care, but this time he had to be sure. Someone had to report, and something about this already had his beard on edge.

Turning around, he put his back against the boulder where he hid and called. A long, peaceful sound echoed among the rocks. He knew the Mins would hear it, even though he was downwind, but he wasn’t worried—he’d been a ranger for more than sixty years and could imitate nature’s calls. His sound was strong and true, riding the wind between the mountain pines and craggy valleys before fading away. He repeated it a few more times, then waited. As expected, the Mins ignored it. Minutes passed, and he watched the trees.

Then a branch moved. Against the wind. His companion was closer than he’d thought, as usual.

Thrag burst from the rocks, hurling his smaller ax at the Minotaur on the right as he sprinted across the clearing. The weapon hit the beast square in the forehead, felling him.

The other Min grabbed its weapon and brayed loudly. Thrag leapt up onto a stump directly opposite the fire, using the smoke to obscure his approach, and launched himself at the beast. He came through the screen with his battleax held high above his head in both hands, yelling as he appeared. The creature raised its halberd to block the strike, but Thrag’s ax smashed into it, splitting the shaft in two. The Min stepped back to steady itself, but the dwarf wasn’t slowing. He landed in front of it, bringing his weapon around and striking diagonally across, hitting the Min below the knee and severing its leg. The creature bellowed a horrific call, falling onto its newly formed stump. The third Min was up now, a spear in hand and coming to the fight. It pulled its arm back preparing to
skewer the dwarf, but a dark form hit it from behind, sending the creature hurtling past Thrag. The dwarf ignored it. He thrust the top of his weapon straight up, hitting the crippled Min under the chin and jolting its head back. Raising his battleax again in both hands, Thrag struck down with his formidable strength, burying the blade deep into the Min’s chest, killing it.

He turned to look for the remaining beast. It hung from the massive jaws of a giant, sleek, charcoal-gray leopard standing eye level beside him.

“About time you helped,” Thrag admonished, looking into his companion’s enormous eyes.

The leopard gently lay the dead Min down on the ground without making a sound and stared back at the dwarf.

Wow! What a read!

These days, when you think of a fantasy read, I immediately think of werewolves and vampires. Not because I like them (or dislike them) but that has been the “fantasy” theme for so many years now.

This fantasy is NOT werewolves and vampires.

In fact, there was not even a word of werewolves and vampires. (I think the closest we even came to a werewolf was Bear, the dog!

Cathadeus is an adventure – albeit a little violent but not graphic – full of action and fighting (it is a war after all).

There is loss, love – emotions galore.

This is book one and I cannot wait to read book two. This is a great series that not only will just adults enjoy, but definitely the younger crowd as well. It may not be up to my 9 year old’s “normal” genre, but I would let him and my 12 year old read it – it was appropriate and a great read!

About the Author
JEFF J. PETERS was born in South Africa and immigrated to the United States as a teenager, where he fell in love with all things fantasy. He obtained degrees in digital electronics and computer science and worked as an IT professional for more than twenty years. In 2014, he left his corporate position to focus full-time on writing. Cathadeus is his debut novel. He is currently working on the sequel.