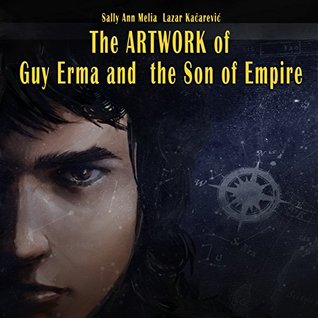 Guy Erma and the Son of Empire is a new SciFi series which has had 60,000 downloads in its first 3 months.

This book collects together a host of images and artwork created by a variety of artists which illustrate and bring to life this amazing adventure.

These pictures, I hope, will add to your enjoyment of the series, and help you visualise the story very much as I see it.

In the words of lead artist Boban: What you can’t see does not exist.

I have read the entire Guy Erma series. You can find all of my reviews here:

I enjoyed all three of the books (and really wish there were more!)

When I was asked if I wanted to review the The Artwork of Guy Erma and the Son of Empire, I didn’t hesitate to say yes. I mean, how could I turn it down when I enjoyed every other Guy Erma book up to this point!?

I absolutely loved seeing the artwork from the Guy Erma and the Son of Empire series! When you read, you clearly get your own visions in your mind so to see the artwork “behind the scenes” of what things look like in the eyes of the author and illustrator – magic.

It is a short book (incredibly short) but was so neat to see what the thought process was and the actual artwork. I feel kind of nerdy, but I really did enjoy seeing the process!

If you have read the Guy Erma series and enjoyed them as much as I did; you will definitely enjoy this addition!

13-year-old Teodor knows his duty to the memory of his father and his kingdom, he must help those less fortunate than himself. He must also impress his uncle the Emperor if he is ever to become the Son of Empire. A frightening nightmare fills him with foreboding, but still he must go – into the Dome.

13-year-old Guy Erma lives in the shadow of the Dome, he has no father and no mother and his future is uncertain, he must start earning a living soon. He knows not where he will live or even how he will eat, and his only dream is to be accepted in the military academy – at the heart of the Dome.

Two boys as different as any two boys might be. One act of cruelty will throw their lives together, but who dare they trust?

The Empire of Freyne is a newcomer to the United Races. As a developing race, the thirteen-planet empire is of interest to other galactic races, not all of this interest is friendly. The Dome Elite is a force of space marines whose defensive actions and adventures defend Freyne and its neighbours from hostile alien pirates and acquisitive space brigands, so allowing the inhabitants to sleep soundly at night.

For the young men and women of Domeside, to be a part of the Dome Elite, you need to master the maths and technology associated with space warfare and also to be fierce fighter who can fight in confined spaces with short sharp blades. When you are in Dome Elite, you are the best!

Meanwhile politicians and imperial rulers know that whosoever controls the Dome Elite, who decides their mandate and mission also controls the empire. You have to inspire and lead the men, to have and hold the right alien alliances and legal treaties. When you own the Dome Elite. you are in power!

Buy the book from Amazon.com

13-year-old Teodor was taken by the vicious Battle Borgs of Dome and now he must fight to survive within the Dome.

13-year-old Guy Era is offered a chance to fight. Only who will be his opponent? Will he face a Battle Borg of Dome? he knows his entire future depends on this one-on-one fight in the light and shadows of the Dome.

Two boys as different as any two boys might be. They face the same enemy, the same danger, the same fear – dare they trust each other?

Introducing the Battle Borgs of Dome

Once they were heroes. These men died as heroes in battle. Now they are reincarnated as the fearsome vanguard of the Dome Elite. They are the Battle Borgs of Dome. When you fight fearsome aliens who have more advanced technology and are innately cruel to lessor species, how many men must die? What kind of warriors do you need? Men who are not afraid to die. Men who have been tried in battle before. Men who are superhuman with cybernetic limbs and implanted weapons. These are the Battle Borgs of Dome Elite. These dead heroes reincarnated as cyborgs and the front line crack troops of the Dome Elite.

The Dome Elite Authorities accept no responsibility for injury or death of civilians entering into inappropriate contact with the Battle Borgs of Dome.

Lock up your women and children! These Borgs retain human instincts but know not their own fierceness and strength.

Who holds the safe words? Part men part machine, the Battle Borgs are programmed with safe words, words that control them for use by their leaders and lords. Who controls those words, controls the borgs!

Buy the book from Amazon.com

” Someone somewhere had decided Sas Darona plague could be used as a weapon.”

“They called them poison pills, and in some cases the glass eco-systems containing six venomous flies were displayed as part of contemporary interior decor.

Strange!” Karl Valvanchi mused, “When you consider the insects are practically unstoppable and breed exponentially into great clouds of death. These plague weapons went beyond deadly. They were planet-killers.”

13-year-old Teodor has found a way to escape from kidnap, how long before he is safely home?

13-year-old Guy Erma has run away from everything he has even known and no longer knows what the future holds.

Their adventure has forged an unexpected friendship, but do they really trust each other? Dare they share their darkest, deepest secrets??

The paths of Teodor Freyne and Guy Erma have now become one, their fate becomes that of the Empire they were born to when they discover a hidden terror.

Buy the Book from Amazon.com