A Piece of You is book 3 in the Sami Rizzo Thriller series and was personally, my favorite of the trilogy. 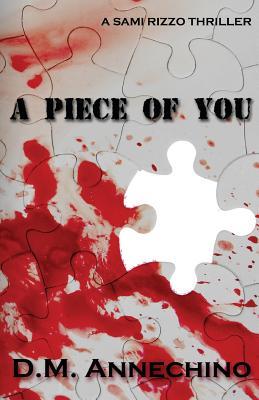 Homicide Detective Sami Rizzo is at it again!

She never dreamed “America’s Finest City,” would be tormented by yet another serial killer, but for the third time in the last five years, a depraved maniac is stalking the streets of San Diego.

Based on her qualifications and prior successes dealing with multiple murders, who else would Captain Davison assign to head the investigation?

Different from Sami’s past experiences, this fanatic is like no other. His methods of killing defy everything profilers think they know about serial killers.

As an intense investigation begins and bits and pieces of evidence emerge, no one can understand his motivation. He’s merciful, yet brutal. And just to make things even more confusing, all of his victims are blood-related.

Is he settling a vendetta? Did he randomly pick a name out of the phone book and begin a rampage? Or is there a deeper story?

Based on very little evidence and a lot of gut instincts, Detective Rizzo pieces together a complex puzzle and narrows the field of possible suspects. She learns that the killings may connect in some way to powerful people within the judicial system and doesn’t know who to trust. Ultimately, she comes face to face with the killer for a battle of brain and brawn. Can she outwit the shrewd killer, or will she be his next victim?

This is book three in the Samantha Rizzo Thrillers. While you don’t need to read the previous two to follow this book, it was still nice to have read them and know Sami and her family.

I was told I would like this one and that it would be different than the first two and it absolutely was. This was a “cleaner” thriller than the previous two books. That’s not to say it wasn’t a book about “killing” but it did not have the sexual undertone as the first two books did.

One thing I have to say that I really like about this author and his books is that even though we typically know the “who” aspect of the book, he weaves the reason throughout the entire story which makes you think and keep reading. All throughout, you get back story and current story that intertwine perfectly.

I read all three books consecutively and even though I am writing this on January 1 and the review isn’t due until end of January; I couldn’t let Sami rest.

While the first two books weren’t necessarily favorites of mine, the Samantha Rizzo Thriller series is a really good series.

Daniel M. Annechino, a former book editor specializing in full-length fiction, wrote his first book, How to Buy the Most Car for the Least Money, in 1992 while working as a General Manager in the automobile business. But his passion had always been fiction, particularly thrillers. He spent two years researching serial killers before finally penning his gripping and memorable debut novel They Never Die Quietly.

​His second book, Resuscitation (Thomas & Mercer 2011), a follow-up to his first novel, hit #1 in Kindle sales in the UK and reached #26 in the USA. He is also the author of I Do Solemnly Swear (Thomas & Mercer 2012) and Hypocrisy. A Piece of You is his fifth novel, the third in the Detective Sami Rizzo series. A native of New York, Annechino now lives in San Diego with his wife, Jennifer. He loves to cook, enjoys a glass of vintage wine, and spends lots of leisure time on the warm beaches of Southern California.