Chantel hasn’t been the same since her sister went missing ten years ago. Ravaged by drug addiction ever since that fateful moment, Chantel vanished a month ago. Could the same kidnapper be involved?

Pulled into the investigation by his friend, Ivy Nash, Ozzie quickly learns the art of the addicted: deceit is a way of life.

Meanwhile, a high school reunion reminds Ozzie of the good old days, but some annoying personalities just haven’t changed. Kate delivers a heart-wrenching song, honoring those who’ve died, in particular her cousin, a boy from Ozzie’s class who made everyone smile — and now, ten years later — shed a tear.

The hunt for Chantel takes Ozzie and Ivy to the most dangerous places in Austin. A girl is bludgeoned to death — they believe they have a key witness, but he slips away.

When Ozzie and Ivy finally get a clue from Chantel’s feisty grandmother, what at first seems unthinkable could be reality. But there’s far more to unraveling this bizarre set of events. Could this all circle back to his high school class?

Two girls connected to one tragic event. Years have passed…people have died, and more could follow. But there is one demented soul who shames those he was meant to save.

Will Ozzie be able to solve this twisted mystery and save the ones who’ve suffered the most?

Get Shame ON You now!

I thought I hadn’t read this book and panicked but the second I started (re)reading the book; it all came flooding back.

This edition involved Ivy working a case of a missing girl and threw us into a crazy world.

There were a lot of players and a lot of action.

There were different pieces to the story  (as usual) that linked everything together eventually but as John Mefford does so well; I was on the edge of my seat and could not get enough.

Every time I think a book of Mefford’s can’t get better; he does. He constantly one ups his own writing.

I cannot wait to see what comes next – not just action wise but for Ozzie’s love life too. I am definitely siding with Ivy on that one!

Books in the Alex Troutt Thrillers: 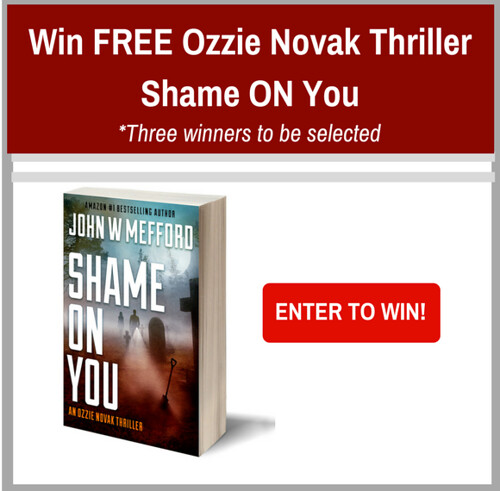 One comment on “Shame ON You (An Ozzie Novak Thriller, Book 4) by John W Mefford {Book Review}”